Do We Need a “Reformed” Papacy? The Story of Pope St. Agapetus

Do We Need a “Reformed” Papacy? The Story of Pope St. Agapetus 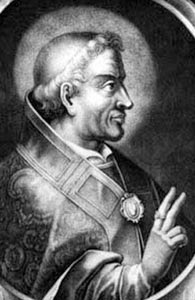 Since the election of Pope John XXIII the papacy has certainly taken on a different character than his predecessors had. Beginning with the Second Vatican Council we see a laxity in how the Church is governed. The effectiveness of how the faith is taught and how effective the errors of the world are addressed is at a clear low point in the modern era of the Church. We hear today of rumors that Pope Francis wants to “reform” the papacy and appeal more to the Orthodox for example, for sake of unity. So we may be well to consider today the necessity of papal reform.

So we ask the question, is the papacy in need of reform? I would immediately answer in the affirmative, but I must qualify what type of reform I would like to see. My reform would not have anything to do with minimizing the role of the Holy Father when it comes to jurisdiction or being the unifying chair of the Church as Vatican I infallibly defined. Nor would it be handing over the majority of Church affairs to local bishops conferences and synods as Pope Francis has reportedly alluded to. Some would indeed like to see the role of the pope minimized to appeal to heretics and schismatics outside of the Church. What is really needed however is a stronger presence of the papacy in the Church with a harkening back prior papal pontificates before John XXIII.

Though modernist scholars would like you to believe that the papacy had no real influence in the early Church and that the Eastern Church supposedly led an autonomous existence uninfluenced by Rome, there is nothing further from the truth.  Most people think the papacy held no power in the Church until Pope Leo III's crowning of Charlemagne in 800. They also claim the real papal power and authority only developed with pontificate of Pope Gregory VII. Modern historians claim that the East did not call upon the pope for matters of jurisdictional controversy. It is with this mentality that many people in the Church today think that we can simply roll back the clock on the papacy, ignore the defined dogmas of Vatican I and the Orthodox would just run back to us with open arms. But for those who have actually studied the history of the papacy, this nothing but a pipe dream.

I will use one particular example of the role of the papacy back in the golden age of Constantinople where the East supposedly reigned unhindered by the papacy. We will get in our imaginary time machines and go back to the year 535 where the great and powerful Justinian and Theodora ruled the Roman Empire from Constantinople. Justinian would indeed be the last great unifying emperor of the Roman Empire making every effort to clean up the mess in the West by reconquering large parts of the Italian peninsula from foreign invaders. We also see the workings a wonderful Pope, which most Catholics probably have never heard of, Pope St. Agapetus I. His pontificate only lasted from May 4th 535 to April 17th 536, and certainly this time period is only a blip on the papal radar screen. But his pontificate gives us a snapshot of the pope’s role and method of solving problems in the Church at the time, especially in relation to the East.

When emperor Justinian learned of the election of Pope Agapetus, he immediately sent a written profession of faith to the Pope. This is an interesting fact, being that most of the Orthodox today would say the pope only held a primacy of honor and not any real authority in the Church. Yet not only did Justinian send a profession of faith to the newly elected pope, he also sent a request dealing with the Arian heretics in the East seeking to be reinstated in the Church. Justinian did not know how to deal with the influx of ecclesiastical Arian heretics who wanted to return to the Church in the hierarchy. Justinian wanted to allow certain reconciled heretics to return to their offices in the Church in the East, so he petitioned the pope to solve this issue.

The pope sent a letter to Justinian accepting his profession of faith while preferring to send legates to address the other question, since canon law at the time generally forbid heretics to enter into orders.  There was also a general council being held in Carthage dealing with this same question, and the pope was also asked to address the council. The council asked the pontiff if it were allowed to confer orders on those who had been baptized by Arians. Pope Agapetus responded and denied the reinstatement of the Arian bishops. He also said that converts were not to be admitted to Holy Orders lest they corrupt the entire priesthood. This is how serious previous popes took the Catholic faith. Pope Agapetus, unlike the lax attitude of the popes of our day, he left nothing to chance when it came to the teaching of the faith. Unlike our time where ignorant Protestant converts can come into the Church and immediately start teaching the Catholic faith without any litmus test, past popes would have had none of this.

This particular controversy however is not the end of this great pope dealing with the East. In his short reign he would pack his bags and borrow money to travel east to meet Justinian in a dispute concerning the stamping out of the Gothic domination in Italy. The East's most glorious general, Belisarius had taken the imperial fleet and anchored it off the coast of Sicily with intention of taking parts of the Italian peninsula back from the Goths. This however meant certain death for those in power at the time. So they petitioned the pope and Constantinople for a sum of money and to be allowed a peaceful exit. Pope Agapetus, a very humble and poor servant of God wanted to travel to settle the dispute, but had no means of wealth to make such a journey. He had to borrow money in order to make the trip east, even putting some of the treasures of St. Peter's up for collateral. Such was his desire to solve these issues.

St Agapetus arrived in the gem of the East, Constantinople on Feb 2nd of 536. Upon arrival he found there was further trouble, being that a Eutychian bishop named Anthimus had been allowed to serve as bishop of Trezbizond. Pope Agapetus would have nothing to do with him despite the empress Theodora’s and Justian's insistence to the contrary. Anthimus was given an opportunity to sign the confession of faith, which he denied, and the Pope himself deposed him. St Agapetus withstood Justinian to his face, and Justinian once again gave St Agapetus his confession of faith. At the same time the Church in Alexandria petitioned the pope to further stem the Eutychian heresy. As a result, St. Agapetus planned to call a council to solve the problem. In the meantime he tried to negotiate with Justinian as to how Belasrius should deal with the problem in Italy. Just before the council could be held to deal with the Alexandrian controversy, Pope Agapetus died unexpectedly on April 17th 536.

With so much on his plate there was great anguish among the faithful in Constantinople. Contrary to what modern Orthodox clergy would have us think, the faithful in Constantinople were not upset at the presence of St. Agapetus, in fact it was quite the contrary. An eyewitness in Constantinople says that “It was a festive day for him… but a season of deep mourning for us. Never were such obsequies celebrated for pope or emperor. Not all the public squares, nor the porticoes, nor the housetops could contain the vast crowds that thronged around the funeral car. Constantinople now saw all her subjects within her city walls.” His body was transported back to Rome where they were laid in the basilica of St. Peter’s.

This little history lesson gives an important perspective on what the reform of the papacy should mean for us today. The laxity in which the modern popes operate by today is certainly in need of reform. The pope is indeed the supreme pontiff of the Church both East and West, and he should prudently act as such. As we can see with St Agapetus, there was no laxity in his resolve that the faith be taught without error and that no compromise should be given to those outside the Church concerning doctrine, dogma, faith and morals. What we are seeing now in the operations of the papacy is in my opinion a failure to teach the Catholic faith clearly and with a firm confidence as to its authenticity. When was the last time you heard a pope demand a bishop to sign a declaration of faith or be deposed? If we roll the clock up to the more recent pontificate of Pope St. Pius X we indeed see much of the same character of a Pope St. Agapetus. All clergy under Pius X were required to sign the Oath Against Modernism. This of course was done away with after Vatican II, much to the detriment of the faith.

So we find ourselves in need of a reform yes, but a reform of different sorts than is being called for by many in the Church today. We cannot continue in the lackadaisical approach, which John XIII began with his pontificate. Unity is not won by compromise of the Catholic faith. The Orthodox must come back to the same disposition they had back in the time of Pope St. Agapetus, sign a Catholic confession of faith, and only then will unity be restored.

Posted by James Bellisario at 5:18 PM