Closer to Mary Mother of God, Closer To God! 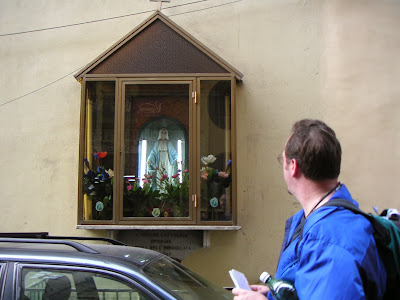 During my 2005 trip to Rome, I became fascinated with all of the wall niches dedicated to the Blessed Virgin Mary throughout the city. As I traveled around Rome I would stop and gaze upon Our Lady and take a few seconds to venerate her at many of these niches. I think it was during this trip that my devotion to Our Lady began to accelerate and become more tangible to me.

Those who are true followers of Christ should have no doubts about the holiness of His Mother, The Blessed Virgin Mary. Nor should they doubt the role she has had, and continues to have in the salvation of men. As I continue to grow in the depth of my Catholic faith, which I should state, is the one true Christian faith, the Blessed Mother of God becomes more and more a part of my life. She is always pointing the way to Christ, and she nurtures my relationship with Christ. As Saint Louis de Montfort wrote, "...establishing sound devotion to our Blessed Lady, it is only in order to establish devotion to our Lord more perfectly...Mary's strongest inclination is to unite us to Jesus, her Son, and her Son's strongest wish is that we come to him through his Blessed Mother. He is pleased and honoured just as a king would be pleased and honoured if a citizen, wanting to become a better subject and slave of the king, made himself the slave of the queen. That is why the Fathers of the Church, and St. Bonaventure after them, assert that the Blessed Virgin is the way which leads to our Lord."

Even when I was a Protestant and I heard people demean the Blessed Mother as if she was just some cold instrument used by Jesus to come into the world, something never set right with me when hearing someone say such things. Although I could not articulate clearly why that condescending language offended my ears, I could understand and state one clear fact. I would give a response something like, "Don't you know that she had God in her womb, and was Jesus' mother! I say that makes her quite different than any human being that has ever existed, period. So I would not be so dismissive at the role that God gave her!" That was about all I could really say at that point in time. The responses I received by my then fellow Protestants, were usually minimal. They didn't really know what to say. Now, having been a Catholic for about 10 years now, I can now more clearly articulate my thoughts about my mother, the Blessed Mother of God.

"Mary, a Virgin not only undefiled but a Virgin whom grace has made inviolate, free of every stain of sin." Ambrose, Sermon 22:30 (A.D. 388) Our Lady cannot be compared to any other created creature, period! She is above all of the angels and all men, and is most like God than other being in existence. This does not make her a part of the Godhead anymore than God can be a mere mortal. However, when it comes to having the highest grace bestowed upon a creature, no one can compare! Not even close. Created in a similar fashion to Adam and Eve, that is without any original sin, the Blessed Mother stands even further apart from sin as the Immaculate Conception. The great Blessed Pius IX further explains, "Hence, to demonstrate the original innocence and sanctity of the Mother of God, not only did they frequently compare her to Eve while yet a virgin, while yet innocence, while yet incorrupt, while not yet deceived by the deadly snares of the most treacherous serpent; but they have also exalted her above Eve with a wonderful variety of expressions. Eve listened to the serpent with lamentable consequences; she fell from original innocence and became his slave. The most Blessed Virgin, on the contrary, ever increased her original gift, and not only never lent an ear to the serpent, but by divinely given power she utterly destroyed the force and dominion of the evil one." It is for this reason that satan hates the Blessed Mother and fears her more than anyone. She was never, ever touched by his filthy paws, and he never had her in his grasp! Instead with Jesus, she crushes his head!

Yet, even as we read great theological writings about Our Lady, she is not a mere theological construct, or historical character that is contained to Sacred Scripture or Sacred Tradition. She is the living Mother of the Church, who actively intercedes for us to Our Lord and Savior Jesus Christ. She reigns with him in heaven as the "Queen of Heaven." "Raised to heaven, she remains for the human race an unconquerable rampart, interceding for us before her Son and God." Theoteknos of Livias, Assumption 291(A.D. 560) Every day when I go to my prayer corner, yes I pray to God Almighty, Father, Son and Holy Spirit. My ultimate intention is to grow in union with God. I also ask my mother and my friends in heaven to pray for me and help to me to live a life pleasing to God. My mother in heaven has a special place in my devotional life. I address her under several titles like, Our Lady of Good Success, Our Lady of Fatima, the All Holy Theotokos and Panagia. My increasing devotion to Saint Dominic has also brought me to a higher devotion to Mary, the Mother of God. As my time spent with God, His Mother, and His Saints increases, my time spent sinning decreases. Therefore I propose that a mere theological perusing of the Blessed Mother is not enough. It must be accompanied by time spent in devotion and veneration of Our Blessed Mother. "God is not the God of the dead, but of the living, for all live unto Him" (Luke 20:38)

Those who call themselves Christians, and yet speak harshly of those who love and venerate the Mother of God are in for a rude awakening. One cannot love God and despise or demean His Mother, it is not possible. They will either love God and honor His Mother or hate God and despise His Mother. Those who refer to Our Blessed Mother as a mere tool or conduit only to be used for Christ's incarnation are blasphemers, and are in no way to be considered true Christians. Christ and His Mother can never be separated in the life of a true Christian. Just as she actively participated in Christ's incarnation, she is grafted into the very fabric of salvation history of the human race, in a unique and intimate manner. This happens of course by God's own design and pleasure. "And the angel being come in, said unto her: Hail, full of grace, the Lord is with thee: blessed art thou among women." (Luke 1:28) How amazing it is to see insolent men despise the ways of God! "He sought a "sanctuary" and "tabernacle," in which He might "take up His abode among-men" (Exodus 25:8)

As we as Christians of the true faith grow closer to the Blessed Mother of God, we directly grow closer to almighty God. There is no other place she can direct us. Our Blessed Mother wishes to share her faith with us, and bring us closer to God. She is the perfect example of what it means to follow God. Remember her very Words she spoke to the Archangel Gabriel, "Behold the handmaid of the Lord; be it done to me according to thy word.", and those she spoke to her cousin Elizabeth, "My soul doth magnify the Lord. And my spirit hath rejoiced in God my Saviour. Because he hath regarded the humility of his handmaid; for behold from henceforth all generations shall call me blessed. Because he that is mighty, hath done great things to me; and holy is his name. And his mercy is from generation unto generations, to them that fear him." Our Lady helps us to serve God as she serves God. As sure as the Sacred Scriptures tell us that all generations will call her "blessed", anyone who is worthy of the Christian name today will, with the fear and trembling of God almighty, call His most precious jewel, The Holy Mother Of God "blessed", lest they make themselves enemies of God!

With a still more ardent zeal for piety, religion and love, let them continue to venerate, invoke and pray to the most Blessed Virgin Mary, Mother of God, conceived without original sin. Let them fly with utter confidence to this most sweet Mother of mercy and grace in all dangers, difficulties, needs, doubts and fears. Under her guidance, under her patronage, under her kindness and protection, nothing is to be feared; nothing is hopeless. Because, while bearing toward us a truly motherly affection and having in her care the work of our salvation, she is solicitous about the whole human race. And since she has been appointed by God to be the Queen of heaven and earth, and is exalted above all the choirs of angels and saints, and even stands at the right hand of her only-begotten Son, Jesus Christ our Lord, she presents our petitions in a most efficacious manner. What she asks, she obtains. Her pleas can never be unheard. (Ineffabilis Deus) 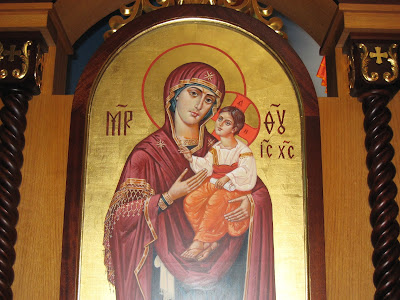 Posted by James Bellisario at 9:26 PM

I didn't notice them when I was in Rome, but I certainly did notice the Virgencitas when I was in Mexico City. Unfortunately, the atheists et al. frequently vandalize them, so they have to be more heavily-guarded (barred-up) than the one you show here.