Here is a link to the video from the Assisi meeting. Some of the talks were given in English if you are interested. Here is a link to the Holy Father's address, which I must say was quite lackluster and largely void of any meaningful content when it comes to evangelization. No mention was given to Christ as being the only way to salvation, nor was any attempt made to convey the fact that the Catholic faith was the one true faith. World peace was of primary concern, and the Pope actually made a connection to the first Assisi meeting and the fall of the Berlin Wall a few years after. The Holy Father did call into question the violence that atheism has brought upon mankind, and dispelled the myth that religion is the source of most violence. Towards the end he makes reference to agnosticism. He blames "believers" as a partial reason for their inability to convert. "Their inability to find God is partly the responsibility of believers with a limited or even falsified image of God." Overall, in my opinion, there was just not much offered here other than an appeal for men of all religions to live peacefully with one another.  Below are a few excerpts from his address.


Twenty-five years have passed since Blessed Pope John Paul II first invited representatives of the world’s religions to Assisi to pray for peace. What has happened in the meantime? What is the state of play with regard to peace today? At that time the great threat to world peace came from the division of the earth into two mutually opposed blocs. A conspicuous symbol of this division was the Berlin Wall which traced the border between two worlds right through the heart of the city. In 1989, three years after Assisi, the wall came down, without bloodshed...

The enemies of religion – as we said earlier – see in religion one of the principal sources of violence in the history of humanity and thus they demand that it disappear. But the denial of God has led to much cruelty and to a degree of violence that knows no bounds, which only becomes possible when man no longer recognizes any criterion or any judge above himself, now having only himself to take as a criterion. The horrors of the concentration camps reveal with utter clarity the consequences of God’s absence.

Posted by James Bellisario at 1:28 PM 5 comments: Links to this post

The well spoken and well respected Catholic author and speaker Tom Woods has weighed in on the Vatican's recent statement regarding world economics. He wrote an article for NPR here, and on his website he has various links to other articles as well. The one link on his website to Phil Lawler's article is also quite interesting. Check them out and let me know what you think about the whole situation. 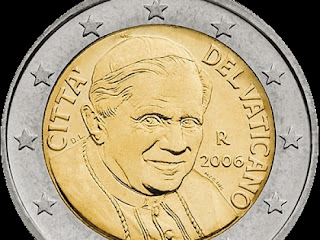 The Vatican and Economics

We have a new statement by the Vatican on world economics. Is this the Pope's idea, or the Vatican pontifical council's idea?

A Vatican document called for the gradual creation of a world political authority with broad powers to regulate financial markets and rein in the "inequalities and distortions of capitalist development."

The document said the current global financial crisis has revealed "selfishness, collective greed and the hoarding of goods on a great scale." A supranational authority, it said, is needed to place the common good at the center of international economic activity.

The 41-page text was titled, "Toward Reforming the International Financial and Monetary Systems in the Context of Global Public Authority." Prepared by the Pontifical Council for Justice and Peace, it was released Oct. 24 in several languages, including a provisional translation in English.

Posted by James Bellisario at 4:44 PM 6 comments: Links to this post

Assisi "building of a better world" ??

Here is the latest on the Assisi debacle. In our age its no longer about spreading the gospel so that man may reach his eternal reward in heaven, its all about building a better world you know.

Vatican City (AsiaNews) – Christianity will be represented by 31 delegations, Judaism by the International Committee on Interreligious Consultation, the Chief Rabbinate of Israel and other international Jewish organisation. Other religions will be represented as well. Five Hindu leaders, 3 Jains, 5 Sikhs, 1 Zoroastrian and 1 Baha’i, 67 Buddhists and the heads of 16 delegations from 11 countries, including the People’s Republic of China. The president of the Confucian Association will come from South Korea, the president of the Taoist Association will come from Hong Kong, and two Shinto delegations will come from Japan. Representatives from four new religions will also be present. There will be 48 Muslims, from Jordan, Israel, Egypt, Lebanon, Algeria, Morocco, Iran, Turkey, Saudi Arabia, Albania, Bosnia-Herzegovina, Bulgaria, Azerbaijan, Tajikistan, as well as some Western countries. Representatives of traditional religions will come from Africa, America and Asia as well as four invited non-believers. More than 50 nations will be represented.

These are the numbers of the ‘Day of reflection, dialogue and prayer for justice and peace in the world’ that will held in Assisi on 27 October, that were presented this morning in the Vatican. The theme of the Day, said Card Peter Kodwo Appiah Turkson, president of the Pontifical Council for Justice and Peace, is “Pilgrims of truth, pilgrims of peace”. It aims “to show, with simplicity, that as religious men and men of good will, we want to offer our own articulated contribution to the building of a better world, whilst at the same time acknowledge the need to grow in dialogue and mutual esteem so as to improve the efficacy of our actions.”

At the initiative of Benedict XVI, this event is designed to mark the 25th anniversary of the first Assisi meeting (pictured) and is meant “to be a dream that continues, becoming more and more a reality. As everyone is with others, no one is against others. Marching from various points on earth, all nations come together as a one family.”

Posted by James Bellisario at 12:01 AM 3 comments: Links to this post

Thomas Woods On The Economy

Thomas Woods has a point on the economy.

Posted by James Bellisario at 10:40 PM 5 comments: Links to this post

Evangelize Those Outside the Church

I recommend listening to this sermon, and then think about all of the people you know who are outside the one true Church. 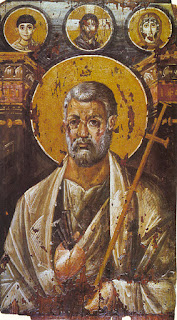 Posted by James Bellisario at 6:53 PM No comments: Links to this post

Email ThisBlogThis!Share to TwitterShare to FacebookShare to Pinterest
Labels: sermon

The Gesu parish in Miami Florida was founded in 1896. Earlier this year I took a road trip to Miami and took some pictures of it. I thought I would share some of them with you. As they say, they just don't make em like this anymore. 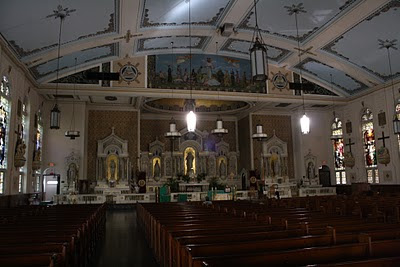 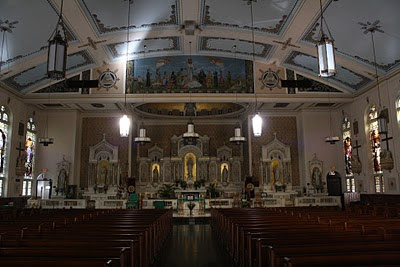 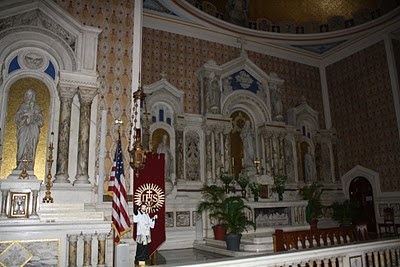 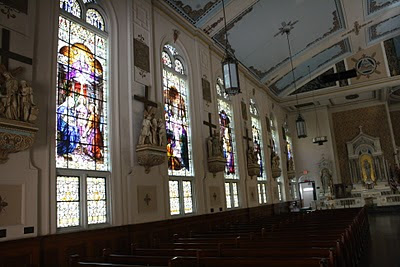 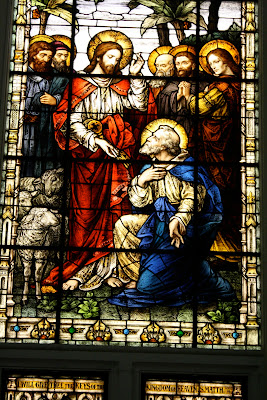 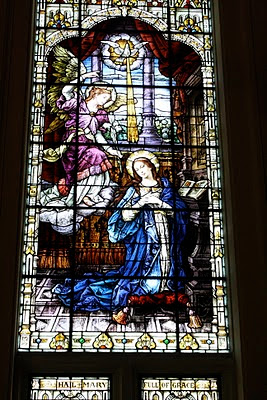 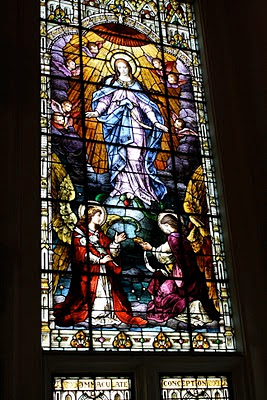 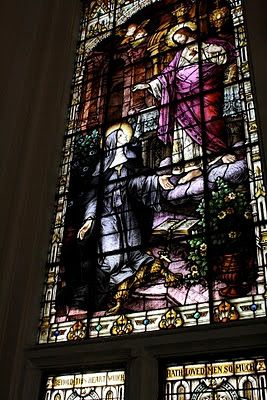 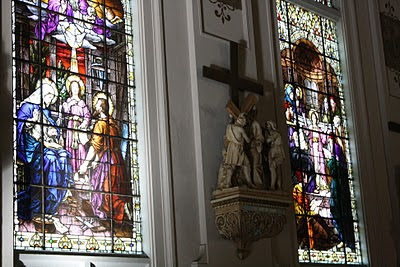 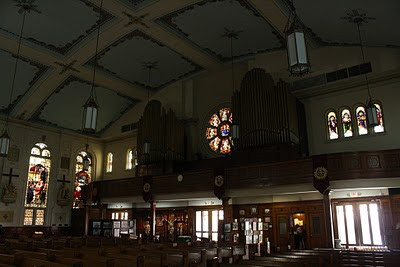 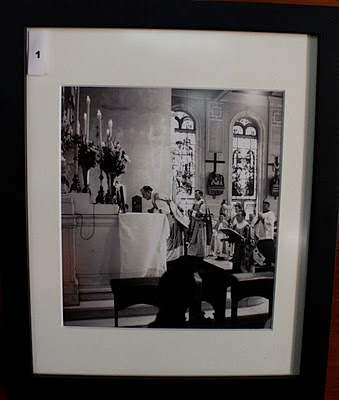 Posted by James Bellisario at 10:18 PM 4 comments: Links to this post

I am sure there are some people who are interested in the "suspension" of Fr. Pavone, who is well known for his work for 'Priests for Life'. There are a series of blog articles that you may be interested in checking out from a canon law perspective. The name of the blog is 'In The Light of the Law' and is penned by Edward N. Peters, JD, JCD, who is a canon lawyer. He has some interesting views on the whole debacle. 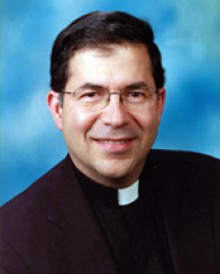 Posted by James Bellisario at 7:57 PM No comments: Links to this post