A reader sent me his observation of the "Magisterium of One", Mark Shea, and how he contradicts himself at every turn concerning the authority of bishops. 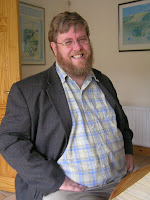 
Two examples. One of Mark Shea attacking his own Bishop based upon mere hearsay, and another example of Shea pretending to be the model christian we should all emulate. Problem is, as evidenced by some quotes below by a priest, Shea is only about being obedient to Shea. Keep in mind these blog posts are only a day apart. Regardless of what the rightful position one should take on each of the cases Shea is disscussing, it is plain as day that this man is a hypocrite and a liar.

A few days ago, Mark Shea on his own bishop without knowing all the facts:

"I don't get the guy. His reasoning isn't even internally consistent since the USCCB (rightly) has no problem at all with 40 DFL, a perfectly peaceful, non-confrontational, non-gory form of civil witness for life. Plus, he's just taken over a diocese that's been through the ringer financially due to abuse lawsuits. So he deliberately spits in the eye of the most dedicated and loyal Catholics, provoking them to withhold their appeal funds out of conscience? What gives?
God grant him a change of heart through Christ Jesus.
By the way, in stark contrast to Bp. Cupich, here is a story about Abp. Vigneron of Detroit, manfully leading people in prayer outside two abortion mills--in the rain. God be praised for good shepherds!"

A priest (a member of the clergy, mind you) cautions Shea on jumping the gun without hearing from the bishop first:

Fr Maurer:
"I call shenanigans. Citing un-verifiable "multiple Spokane priests" just doesn't cut it when making such a huge - and potentially damaging - claim about a bishop.
and...
With respect to all of the kind folks who have piped in from the Diocese of Spokane, it would be prudent (as many have said) to seek or await some verifiable information from the bishop himself. We risk a great dis-charity towards the bishop if we come to conclusions based on the words of others - even priests!..."


Mark Shea a couple of days later describing his own pious example of obedience to the hierarchy and prudent judgment in always allowing the facts to speak for themselves (yea, right...hypocrite):

"I continue to do what every sensible Catholic should do: defer to the bishop's rightful authority, let the facts emerge from the investigation (and the appeal to Rome) and let the chips fall where they may. The reflexive, kneejerk tendency of alleged "faithful" Catholic to perpetually assume that every American bishop is a fifth columnist working to destroy the Church is foreign to the mind of Christ."
Posted by James Bellisario at 2:09 PM

The Bishops are the great authority for Mark - except when he doesn't agree with them.

Shea vs Shea, it would be like watching a couple of sumo wrestlers go at it! Seriously speaking, it behooves us to learn the scriptures and oral traditions of the Holy Catholic Faith well enough so we know which bishops (and bloggers) are trustworthy. Bad Bishops and bad bloggers won't have any dmb sheep to shear if the sheep know the sond of the master's voice.

Mark Shea I found to be an eminently reasonable and charitable man. Sometiimes we make mistakes. He runs a pretty busy blog and has to support a large family in a horribly secularized part of the US on the proceeds of his full time ministry.

I think before we call him a liar we ought to use the very maxim this post accuses Shea of not using "In necessary things unity, in doubtful things liberty, in ALL things charity"

Whew! That was close!
Our Judicial system, the envy of the world, successfully manages to kill Troy Davis before too much evidence of his innocence accrues and public demand to revisit the case creates a big paperwork headache for everybody. The important thing is that we got somebody killed, not whether or not they, you know, deserved it. Moloch requires sacrifice and isn't that picky about who he eats.

Well, we have a criminal justice system that, based on new forensic evidence science, is much less likelie to execute an innocent person than in the past.

We have 300 million people in the US and have executed all of 35 people this year.

Mark Shea considers this a "Moloch" system and thinks that this guy was killed because government employees didn't want to shuffle too much paper?

Just more of the absurd idiocy of Shea to blow things out of proportion. He somehow thinks he is the voice of moral orthodoxy for the entire English speaking Catholic world. The problem is the guy doesn't know high from low, east from west, or the absurd from right reason. I wonder how his bishop is taking the personal attacks he is making against him? Nothing would make me happier than to see his own bishop shut him down and make get a real job. I doubt that will happen however.

It also appears in his updated post that the fool is going to further prove his incompetence on the death penalty tomorrow.

So I was still puzzled at the extreme animosity towards Mr Shea, I don't have any background on the disputes you have with him, and note he has admitted he was quick on the draw w.r.t the man's innocence.

I suppose that's his style somewhat shoot from the hip but it at least indicates he's happy to take correction.

I wonder if, given our enemies are circling see Fr Schall's latest in 'The Catholic Thing' we have the luxury to talk this way to each other in public? I just can't see how we can afford it?

Again I couldn't comment intelligently on the specifics of these various criticisms of Mr Shea but surely we all have a common enemy - the completely dominant public philosophy of liberalism that Jim Kalb describes and analyses.

So in another context your rhetoric might be necessary but today?

Anyway from a disinterested outsider, for what it's worth your language seems really disproportionate to the danger. It surely must be reserved for Liberalism and their unprincipled promoters? I mean I need you, I need Mark Shea, I need a political alliance among Biblical Christians for the sake of, as Schall shows, not going to blooming jail!

Please help us out who don't have your learning but commitment to Catholicism. Bring us together. Please.

How in the world can Shea claim that we are in a rush to execute this guy when he was convicted 20 years ago? How can he claim that people want him dead because they don't want to do paperwork? The guy's case was reviewed by 12 courts. And then he compares the criminal justice system to Moloch, but the Georgia courts excluded evidence of Davis' bloody shorts because it found the evidence was obtained improperly.

This is information that is readily available on the internet.

This is Shea's MO.

Neil I don't doubt that info was available. But I didn't mention he has alot on his plate, he did update his post and, thanking a helpful contributor, said it is likely he was too quick on the draw.

We all make mistakes, is it beyond us as brothers fighting a common foe to moderate our language and be slightly more patient with each other especially in public? I think if Mark Shea was guilty of breaking this rule himself he would be disposed to gentle correction.

If his style/virtue is pugnacity then it can be said also I think, from a brief look, of this blog too. This is a highly valuable and rare quality among us Catholics today. We ought to foster it and refine it in fellowship - in service to the great King.

Remember what the pagans said of us originally "Look how they love one another!"

We all make mistakes and frequently fail to do the research. But if you are not going to do your homework, then don't go and attack the motives and character of people who reach a different conclusion.

The important thing is that we got somebody killed, not whether or not they, you know, deserved it. Moloch requires sacrifice and isn't that picky about who he eats.

Update: My pal Secret Agent Man tells me (in the combox) to cool my jets on the "innocence" thing and I think he's got a point (though I also think the case still looks pretty dodgy too). I'm not going to go to the mat for his innocence particularly, but what bugs me is that there seems to have been little interest in "the process" for the fact that a good chunk of the testimony against him looks pretty shady. I'm opposed to the DP even if he were guilty, but part of what bugs me about it as well as that a sort of bureaucratic inertia decrees that a prisoner, once found guilty, must be executed even when there are real doubts about his guilty. Rick Perry swaggering conscience-free approach to questions of executing possibly innocent men is the paradigm here and that's what I was (over) reacting to in this case.
___

He is still accusing people of being servants of Moloch. And no one is saying that someone should be executed if there are "real doubts." A jury of his peers found there was not reasonable doubt.

And still this nonsense about "bureaucratic inertia." 12 courts reviewed this guy's case.

If this were the first time Shea pulled this crapola it wouldn't be such a big deal. But has done if before and will do it again.