Dr. Steven A. Long (The Teleological Grammar of the Moral Act) 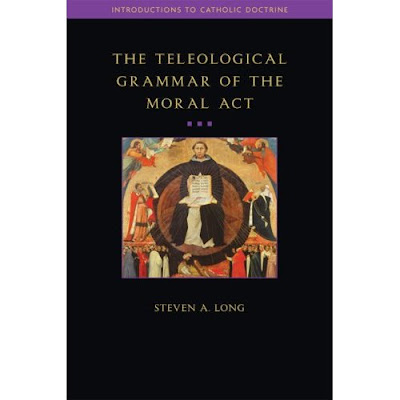 Today’s confusing theological climate in the Church is a troubled one indeed. I believe that the theologians of the Church are divided between those who are realists, and those who are modernists, and I also believe that the theology of Saint Thomas Aquinas is the remedy for those who are being tossed about by the waves of the errors of modernism. I believe that this is nowhere more readily apparent than in the realm of moral theology. When it comes to defining the species of a moral act, I would argue that most Catholic moral theologians today flunk the litmus test out of the gate. Those outside the Church such as the Protestants are not even on the map. In the Church we have only to look at the "New Natural Law" theorists like Germian Grisez, John Finnis and others to see how much damage this lack of proper theological understanding has caused. We have moral theologians who cannot even discern properly the nature of an abortive or contraceptive act. What was once admitted by Catholics and Protestants alike, to be known as an intrinsically disordered act, by observation of the Natural Law, contraception, is now accepted as being morally licit by all major Protestant denominations. Unfortunately many theologians in the Church are abandoning proper moral theology as well. Although the Church herself will never err in her teaching, modernists in the Church are not teaching the Catholic faith properly, many probably due to ignorance. There is no better book than Dr. Steven A. Long’s ‘Teleological Grammar of the Moral Act’ to explain the importance of why Thomism is so important for moral theologians today.

Although in the introduction, the book is depicted as a primer to St. Thomas Aquinas, “regarding the intention, choice, object, end, and species of the moral act” it is by no means a light read. Those who have little familiarity with Saint Thomas or Aristotelian philosophy may find it a bit difficult. So I have put it in the advanced category on my essential reading list. Nonetheless, this book is certainly required reading for those interested in understanding the basics of moral theology. A little bit of effort in reading this book is a worthwhile investment. The book is only about 140 pages, so it is not overwhelming, but it is packed with useful information, and you will surely reference it time and time again.

In this book Dr. Long tackles a ton of moral issues including but not limited to private defense, AIDS and condom use, separating conjoined Siamese twins and an astounding chapter on the principle of double effect. After reading this book you will realize how few theologians understand the principle of double effect properly. Chapter one opens with explaining choice and intention, means and ends. St. Thomas’s moral analysis of the nature of morality and the natural teleological structure it is founded upon is covered in detail. If you are already asking yourself what teleology is, let me explain a bit. The word is derived from the Greek term telos, which means “purpose” or “end”. Teleological means having a purpose, end or a particular design for an end. In moral theology, we look at acts in this fashion, as having an intended purpose or end to them, and this is rooted in the natural law.

There are some key components to understanding moral ethics. For example, there is a clear distinction between choice and intention, “Intention is of the end, and choice is of the variable means to the end.” In other words we choose a means to get where we want to go, after we first desire a proximate end. Dr. Long uses an example of a person’s desire of having good health, and only then chooses to use penicillin to reach that desired end. So not only is the choice and the means important, but also the intended end, which should be ordered towards the “good”. Along with this properly ordered end comes prudence in how we reach that end. Of course all of this presupposes that the human mind is able to know and understand reality, which many people deny today. “...for precisely what defines the teleology of human nature is that it constitutes reasons for action. Prior to any practical agency of the human subject, one must know the end which one then ensuingly comes to desire.”

Long then delves a bit into Aquinas’ view of the speculative and rational intellect, explaining the proper distinction between the two. Then the object, end and moral species is covered. “The primary and decisive element for moral judgement is the object of the human act. One can see, then, how critically situated the discourse of St. Thomas is which delineates the nature of the object of the moral act... the object of the act always includes a relation and proportion to the end sought.” There is much more covered throughout the chapter dealing with this subject. After Dr. Long lays down the basics of this natural teleology he then moves on in chapter two to explaining how this all works in the case of private defense. He does so because it is easy to show how a distorted or absent knowledge of Thomas’ position on teleology can lead to error in assessing the morality of an act, and this is one area that is often misunderstood today. The Summa Theologica II-II q 64, a 7 along with the great Tommaso de Vio Cajetan is referenced here, and I would recommend referencing Saint Thomas’s text when they are referred to. Most of them are easily found online.

The third chapter alone is worth the price of the book, which covers the principle of double effect. Dr. Long gives the proper understanding of the principle of double effect, and how it is often misapplied today. It is proven that there are few cases that require such an application. Self defense is again addressed and used to illustrate his point. The appendix in this book is really fun to read. Here Dr. Long addresses a variety of modern complicated moral dilemmas and he shows how to apply this teleological theory to determine whether these particular actions are morally licit or not. Have you ever wondered whether or not it would be permissible to separate conjoined Siamese twins? Dr. Long walks you through this moral dilemma. I will not spoil it for you here.

This book belongs on every Catholic bookshelf in America. Truly, it really belongs on your desk or on your nightstand so you can reference it time and time again. My copy is underlined from the beginning to the end. Many today simply do not know how moral theology was done in the Church prior to the modern age. This book teaches you the principles the Church has used for centuries to determine the nature of moral acts. Many moral theologians have strayed from the path of reality, and have tried to change how we define good and evil, right and wrong. This is very apparent with those who confuse private defense with the death penalty, or try to justify using condoms because of the danger of AIDS. It is my hope that this publication will be promoted by all of the major Catholic media outlets. The book is published by Sapientia Press of Ave Maria University, and it is endorsed by the great Thomistic theologians, Ralph McInerny, Romanus Cessario O.P, and Russell Hittinger. It can be purchased on Amazon for $24.95.

(All quotes are from 'The Teleological Grammar of the Moral Act)


Steven A. Long, Ph.D. is Professor of Theology. He has previously taught at the University of St. Thomas, at St. Joseph’s College, Christendom College, and the Catholic University of America. His research interests include Thomistic metaphysics and natural law; the theology of grace in relation to human freedom; the philosophy and theology of Law; and such specific moral issues as the death penalty and the nature of the object of the moral act. He has published many articles in such journals as Communio, The National Catholic Bioethics Quarterly, Nova et Vetera, Revue Thomiste, and The Thomist, as well as chapters on such topics as divine providence, the death penalty and Evangelium Vitae, the doctrine of just war, and religious freedom. His book The Teleological Grammar of the Moral Act was published in 2007 by Sapientia Press. His work Natura Pura:  On the Recovery of Nature in the Doctrine of Grace was published by Fordham University Press in April of 2010. Professor Long is also the author of a metaphysical work that has been approved for publication by the University of Notre Dame Press, titled Analogia Entis.  A collection of Dr. Long's essays, tentatively titled Thomistic Disputations: Providence, Freedom, and Law has been accepted for publication and is forthcoming from Sapientia Press. Along with the Academic Dean of the St. Paul Seminary School of Divinity at the University of St. Thomas, Dr. Christopher Thompson, he is the co-editor of the forthcoming collection of essays derived from the Lilly sponsored Habits of Mind seminars, titled Reason and the Rule of Faith.  He holds an M.A. from the University of Toledo and a Ph.D. from the Catholic University of America.

Posted by James Bellisario at 11:44 AM