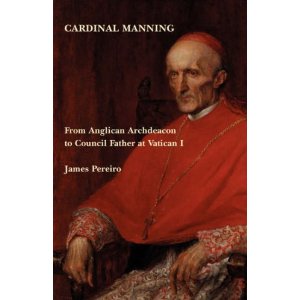 If you really want to understand Catholic ecclesiology then Cardinal Manning's works are indispensable. Although many of his works contain well formed views of Catholic ecclesiology, there are two books that I suggest that you read which will give you a good overview. One is a biography written by Fr. James Pereiro titled 'Cardinal Manning: From Anglican Archbishop to Council Father at Vatican I.' Aside from being a great biography, Pereiro devotes a good portion of the book to Manning's view on the Church, which ultimately lead to his conversion. The other book is Manning's own work titled 'The Temporal Mission of the Holy Ghost.' It is available in the public domain. The Cardinal Manning Society is working to print a newly typeset edition next year. Manning's view of the Church rests in the necessity of having an infallible Church speaking with an infallible Living Voice, that of the Holy Ghost.

Manning's core argument lies in the fact that one will either listen to the Living Voice of the Holy Ghost, which came upon the Church at Pentecost and remains with us today, or in that of human criticism. The mistake made by those outside the Church is that they rely on their own ability to reason through history, the Scriptures or the Church Fathers, and then determine for themselves what they are going to believe doctrinally. This is why there is no unity outside the Catholic Church regarding Christian doctrine. The Protestant mind can only assent to what it feels comfortable within its own reason. They divide over baptism, marriage and divorce, predestination, salvation and justification and the list goes on. Manning sums up the problems of this error quite simply when he responded to the unionism and latitudinarianism that was plaguing the Anglican Church of his time. "There can be but two principles and two tendencies: the one divine faith...the other, of human criticism, disguise it it as you may in texts of Scripture, or in Patristic learning, or in sceptical history, or rationalistic interpretation, the tendency of which is always to wider formulas and diminished truth, to comprehension of communion, and loss of faith."(APUC44)
Posted by James Bellisario at 10:28 PM