Can Feast Days Be Obligatory? Galatians 4:9-11

9 But now, after that ye have known God, or rather are known of God, how turn ye again to the weak and beggarly elements, whereunto ye desire again to be in bondage? 10 Ye observe days, and months, and times, and years. 11 I am afraid of you, lest I have bestowed upon you labour in vain. 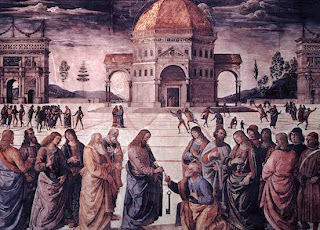 An old accusation made by Protestants is that Galatians 4:9-11 refutes the Catholic Church's authority to make Holy days of obligation. Yet if we look at Galatians St. Paul is specifically talking to the Jews and their practices that were being done for the sole purpose of following the letter of the law. This passage has nothing to do with the Church which Jesus Christ would build upon St. Peter, which would have the authority to bind and loose. First I want to quote the Angelic Doctor, Saint Thomas Aquinas from his commentary on this particular passage. We can see that he clearly interpreted this passage to pertain to the Jews specifically. It is very obvious that the Catholic Church's Holy Days of Obligation do not fall into the context of this passage.

For since in the entire section preceding this passage, as well as in all that follows it, he is censuring the Galatians for removing themselves from the faith and turning to the observances of the Law, it is more in keeping with his intention to expound it as referring to their turning to the legal observances. Hence he says: After that you have known God through faith, how turn you from the faith to the elements, i.e., to the literal observance of the Law? It is called an element, because the Law was the prime institution of divine worship. To elements, I say, that are weak, because they do not bring to perfection by justifying: “For the law brought nothing to perfection” (Heb 7:19), and needy, because they do not confer virtues and grace or offer any help of themselves.


But what does he mean by are you turned? For to say this, as well as to say, again, seems inappropriate, for they neither were Jews nor had they formerly observed the Law. I answer that the Jewish worship is midway between the worship of the Christians and that of the Gentiles: for the Gentiles worshipped the elements as though they were living things; the Jews, on the other hand, did not serve the elements but served God under the elements, inasmuch as they rendered worship, to God by the observances of bodily elements: We were serving under the elements of the world (v. 3); but Christians serve God under Christ, i.e., in the faith of Christ. Now when a person reaches a terminus after passing through the middle, if he then decides to return to the middle, it seems to be the same as returning to the very beginning. Therefore, because they had already reached the terminus, namely, faith in Christ, and then returned to the middle, i.e., to the Jewish worship, then because of a resemblance of middle to beginning, the Apostle says that they are turned to the elements and are serving them again.
That this is so, he proves when he says: You observe the days of the Jewish rite, namely, Sabbaths and the tenth day of the month and such things, which are mentioned in a Gloss, and months, i.e., new moons, as the first and seventh month, as is had in Leviticus (Ch. 25), and times, namely, of the exodus from Egypt, and the practice of going to Jerusalem three times a year, and years of jubilee and the seventh year of remission. From this arises a danger because faith in Christ profits nothing from it. Hence he says: I am afraid of you, lest perhaps I have labored in vain among you; and further on: If you be circumcised, Christ shall profit you nothing (5:2).

Now we turn to a great Scripture commentary, which pulls from the Fathers of the Church. Below is a great explanation of verse 10 from the Commentary of Cornelius Lapide. As we can see, the Church Fathers knew better than to interpret this passage in such a way that compares the Church's feast days and liturgical calender to that of the Jews being referenced in this particular passage. It just goes to prove once again, that a Protestant can twist Scripture to mean whatever he wants it to mean, especially when it comes to furthering their cause against the Catholic Church.

Ver. 10.—Ye observe days, and months, and times, and years. As S. Augustine (Ep. 119 and Enchirid. 79) and Anselm understand the elements to be the sun, moon, and idols, so do they understand this verse to mean days that were lucky or unlucky, according as astrology made them so. But Chrysostom and Jerome and others explain the days to be the Jewish Sabbaths; the months to be the new moons, and the seventh month, which was held sacred throughout; the times to be the stated feasts of the four seasons—the Passover, Pentecost, the Day of Atonement, and the New Year; and the years to be the seventh year of remission of debts, and the fiftieth year of jubilee. By the observance of days, months, and years, S. Paul means the ceremonies of the Old Law as a whole.

From this appears the error of the heretics, who infer from this that the feasts of the Church are condemned. If they were, then would the heretics themselves be condemned for keeping Sunday? What is condemned here is the observance of the Jewish feasts only. These are happily distinguished from those observed by Christians, by Gregory Nazianzen, in his Whitsuntide Oration, in which he says: “The Jew keeps feast days, but it is according to the letter; for by observing the corporeal law he attains not to the spiritual. The Gentile keeps feast days, but it is according to the body, in revelling and wantonness. [Accordingly Lucian (Saturnalia) bids that nothing be done during the time of the feast, whether in public or in private, but what pertains to sport, to pleasure, and to lust; nay, the feasts of the heathen were obscene in themselves, witness those of Venus, Priapus, and Bacchus, in whose honour every abomination was practised]. We Christians keep feasts, but only such as are pleasing to the Spirit.”

Jerome, too, says: “Any one may say that if it is not lawful to observe days, and months, and times, and years, then we do what is forbidden in observing Wednesdays, and Good Friday, and the Lords Day, and the Lenten fast, and the Easier solemnities, and the Whitsuntide festivities, and the days set apart in different places in honour of the martyrs. A wise and simple reply to this will be that the Jewish feast-days differ from ours. We do not observe the feast of unleavened bread, but that of the Cross and the Resurrection, nor do we number our weeks to Pentecost as the Jews did, but celebrate one coming of the Holy Spirit.” From which we may observe that, in S. Jerome’s time, days were set apart in honour of the martyrs, and that the practice is approved by him.

Posted by James Bellisario at 9:46 PM

Matt, I'm a former member of the Worldwide Church of God. This article really rang a bell with me. I used to keep these holy days many years ago, and I'm glad I'm free of this Judaistic bondage. However, I consider it sad that Association of Hebrew Catholics seems to want to keep any converts they make in a Judaic frame of mind by using both the Church calander and the Hebrew calander. I can't see how a Jewish person can be intergated into the Church if the rituals of the one they left behind are thrown constantly in their faces. We wouldn't allow a JW, a7th Day Adventist, a Muslim, or a Mormon to hang on to their old cuustoms brcase it would endanger their salvation. Yet the AHC members are allowed to do this. They might as well go back to the synagogue.