This is like listening to Charlie Brown's school teacher. WA WA WA WA... His philosophy is so bad that it is amazing anyone can take this guy seriously. It quite apparent that he has no clue as to what the natural law is, and frankly we must even question if he even believes that anyone can know anything for sure, except for him of course. Watch the videos below for a comparison between Harris and Brown's school teacher (just having a little fun), and then read the response below for a bit of insight from the great theologian and philosopher Fulton Sheen! I learned about this great book of Sheen's in a recent class that I took on Thomistic philosophy.


A response from Fulton Sheen,
God And Intelligence In Modern Philosophy A Critical Study In The Light Of The Philosophy Of Saint Thomas (Chapter I) 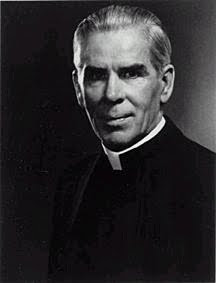 Modern philosophy has seen the birth of a new notion of God. There is nothing of greater importance, as there could be nothing more ultimate. Even the very attitude of one man to another or of one nation to another varies with the conception of God. The outlook on the world changes the moment the outlook on God changes. And if we had intellectual vigour enough to ascend from effects to causes, we would explain political, economical and social phenomena less by credit sheets, balance of trade and reparations, than by our attitude towards God.

The new idea of God has not burst upon the world with the suddenness of a new star. It has had its antecedents dating back over half a century. New scientific notions, increased faith in the philosophy of progress, birth of new values and interpretations of life, love of novelty, dissolution of dogmas each has contributed its share to bring it into being.

Now that it is born, it stands before the world, not so much as a modified notion, as a new creation. Though coining from the past, it differs from all that has appeared in the past. It is, as it were, one of the novelties of evolution ; it differs from the old even more than Aphrodite differs from the sea from
which she sprang. Its face is set in another direction. It brings man into greater prominence. It exalts him even to the extent of giving him a " vote in the cosmic councils of the world." It is, in a word, the
"transfer of the seat of authority from God to man."...

No philosophical congress is complete to-day without a lecture on the confusion amid philosophers. The world is full of thinking, but there is no agreement in thought. There are philosophers, but there is
no philosophy. There are "distinguished men but no man ; big heads but no head. Heads of schools without schools, leaders without followers, societies without members," Spencerian thought has been buried in the grave of the Unknowable; the history of Pragmatism is now being written as an  exaggerated reaction against Idealism. Italian Neo idealism has dissolved philosophy into history and melted reality into mind ; Bergsonian becoming is decaying, and a sort of philosophical biologism remains as its heritage, The hurry, the fever, the restlessness, the excitement which blind
us to the divine in things leave nothing but a philosophy of action for men of action. ..." Men are suffering from the fever of violent emotion, and so they make a philosophy of it."...

In other words, the time is at hand when modern philosophy, not only because of its own confessed bankruptcy, but also because of the inherent merits of the philosophia perennis, must take definite cognizance of the thought of St. Thomas. This brings us to the positive side of the philosophy of the
Angelic Doctor, namely, the fact that he is the first of modern philosophers, as M. tienne Gilson of the University of Pans has put it. "He is the first, not because he has created the principles and invented the attitude in which we live, nor because all the directions of thought by which the thirteenth century prepared the modern epoch were concentrated in his works ; but because he is the first occidental of whom the thought is neither enslaved to dogma nor to a system.

But there is yet another reason why the philosophy of St. Thomas is particularly useful at this moment. What are the two great problems with which modern philosophy is struggling ? Are they not the immanence of God in the universe and the subjectivity of thought ? All religion hangs on the first and
all science on the second. The divine and the human are in the balance with these two problems.
But there is no philosophical system in existence which so completely and thoroughly treats and solves these questions as the Thomistic.
Posted by James Bellisario at 6:18 PM