The Sacred Deposit of Faith: Part II The Divine Liturgy 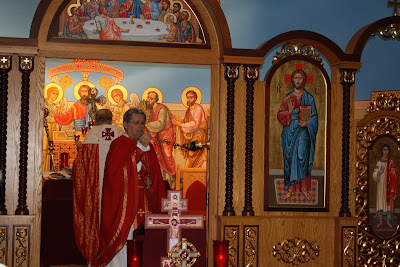 In the first part of this series we looked at Divine Revelation, and its transmission within the Church. In this second part I wanted to look deeper into the importance of the Divine Liturgy, or as we call it in the West, the Holy Sacrifice of the Mass. First we will look at some inspiring texts given to us by Pope Benedict XVI in reference to Saint John Chrysostom. There are several elements about the liturgy that he touches on in referring to Saint John Chrysostom. Pope Benedict is a brilliant scholar and is able to pull great wisdom from the Church Fathers.

Chrysostom's faith in the mystery of love that binds believers to Christ and to one another led him to experience profound veneration for the Eucharist, a veneration which he nourished in particular in the celebration of the Divine Liturgy. Indeed, one of the richest forms of the Eastern Liturgy bears his name: "The Divine Liturgy of St John Chrysostom". John understood that the Divine Liturgy places the believer spiritually between earthly life and the heavenly realities that have been promised by the Lord. He told Basil the Great of the reverential awe he felt in celebrating the sacred mysteries with these words: "When you see the immolated Lord lying on the altar and the priest who, standing, prays over the victim... can you still believe you are among men, that you are on earth? Are you not on the contrary suddenly transported to Heaven?"

There are several key points to consider when looking at this text. First of all Saint Chrysostom refers to Our Lord actually being present on the altar. He also sees the priest as the one who prays over the "victim", which is of course Our Lord. He also points out that the love and mystery present in the liturgy is the love that binds believers. One has to ask why Protestants have completely abandoned the priesthood and the Liturgies that were of such an importance to Saint Chrysostom. Let us continue on and look at this document further to see Saint John's attitude towards how Christians should approach the Divine Liturgy.

With great depth, Chrysostom developed his reflection on the effect of sacramental Communion in believers: "The Blood of Christ renews in us the image of our King, it produces an indescribable beauty and does not allow the nobility of our souls to be destroyed but ceaselessly waters and nourishes them"[60]. For this reason, John often and insistently urged the faithful to approach the Lord's altar in a dignified manner, "not with levity... not by habit or with formality", but with "sincerity and purity of spirit"[61]. He tirelessly repeated that preparation for Holy Communion must include repentance for sins and gratitude for Christ's sacrifice made for our salvation.

Here we see how important it is not to approach the divine mysteries with the stain of serious sin on our souls. We should also not do it out of habit, but out of a pure love for Our Lord. In 1992 Pope John Paul II gave a general audience which centered on the Eucharist in the liturgy. He refers to the great Angelic Doctor, Saint Thomas Aquinas.

The Eucharist is the summit of the whole Christian life because the faithful bring to it all their prayers and good works, their joys and sufferings. These modest offerings are united to the perfect sacrifice of Christ. Thus they are completely sanctified and lifted up to God in an act of perfect worship which brings the faithful into the divine intimacy (cf. Jn 6:56-57). Therefore, as St. Thomas Aquinas writes, the Eucharist is "the culmination of the spiritual life and the goal of all the sacraments" (Summa Theol., III, q. 66, a. 6).

The Angelic Doctor also notes that the "effect of this sacrament is the unity of the mystical body [the Church], without which there can be no salvation. Therefore it is necessary to receive the Eucharist, at least by desire (in voto), in order to be saved" (III, q. 73, a. 1, ad 2). These words echo everything Jesus himself said about the necessity of the Eucharist for the Christian life: "Amen, amen, I say to you, unless you eat the flesh of the Son of Man and drink his blood, you do not have life within you. Whoever eats my flesh and drinks my blood has eternal life, and I will raise him on the last day" (Jn 6:53-54).

The Pope here again reiterates the constant teaching of Jesus through the ages, referring to the necessity of receiving the Eucharist for eternal life. We should all be thankful that Christ gives Himself to us at each and every Divine Liturgy. It must be noted here that we recognize the unifying effect the liturgy has on the Church. There has never been a time when the Divine Liturgy has not been celebrated since Our Lord ascended to heaven. It was established with the apostles at the Last Supper to be celebrated until the end of time. "Luke 22:19 And taking bread, he gave thanks, and brake; and gave to them, saying: This is my body, which is given for you. Do this for a commemoration of me."

This thought is further expounded upon in a joint dialog with the Eastern Orthodox Churches who also believe and celebrate the same Eucharistic liturgies. The Eastern Catholic and Eastern Orthodox share the very same liturgies with one another and have done so for the better part of 1700 years. I believe that this is what keeps the Orthodox Churches so close to being in line with the Catholic Church. It is the reverence and observance of the Divine Liturgy. The Protestants on the other hand continue to fracture and divide over the years because this unitive factor of the Church has been abandoned.

Many protestants have misunderstood the sacrifice present to the Church in the Divine Liturgy. Many like John Calvin insisted that the Catholic Church intended to re-sacrifice Our Lord over and over again. This however has never been the case. That is clearly not what the Church has taught over the centuries. The Church has insisted that the sacrifice of Our Lord is an eternal sacrifice to which we enter into beyond the scope of time. Malachias 1:11 "For from the rising of the sun even to the going down, my name is great among the Gentiles, and in every place there is sacrifice, and there is offered to my name a clean oblation: for my name is great among the Gentiles, saith the Lord of hosts." In reading the following excerpt by a synod of bishops we can see how and why Saint John Chrysostom could refer to Christ as being present there on the altar, just as the Catholic and Orthodox Churches teach today. This large document is well worth reading through.

THE EUCHARIST:
SOURCE AND SUMMIT
OF THE LIFE AND MISSION OF THE CHURCH

During this “mystical supper,”[21] Jesus Christ brings together in his Person the past of the Old Covenant, the present of the New Covenant and the future of the things to come.[22] With the Eucharist, we enter into another dimension of time not subject to our measurement, in which the future, illuminated by the past, is offered to us as the unchanging present. In this way, the mystery of Christ, Alpha and Omega, becomes contemporaneous to each person in every age and time.[23] Time grows short (cf. 1 Cor 7:29), we await the resurrection of the dead and even now live the life of heaven. “This mystery makes heaven of earth.”[24]

Once again in an effort to keep this information digestible, I will cut it short and continue expounding on the Divine Liturgy in part III of this series. I will leave you with a quote from the great Saint Padre Pio.

If we only knew how God regards this Sacrifice, we would risk our lives to be present at a single Mass.
Padre Pio.

Posted by James Bellisario at 3:44 PM