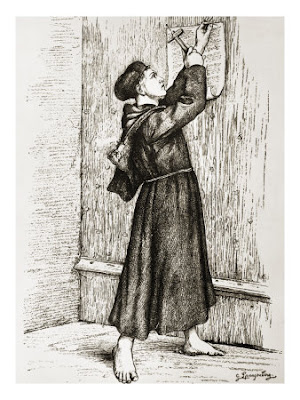 I ran across an interesting article by a Protestant professor, Rev. Prof. Dr. Francis Nigel Lee. He wrote an article on how Luther viewed the Catholic Church as well as Islam. Martin Luther apparently thought the two not very different from each other and referred to them both as being from the devil. There are many Protestants today who distance themselves from Luther's writings, or who try and water down his hatred for the papacy. This professor here however makes it clear that to be a true Protestant you must hate the Catholic Church. I wanted to pull a few quotes from the professor's paper to illustrate how twisted Martin Luther really was. In fact as I have said before, most of Luther's writings are nothing more than emotional, personal rants with little or no substance to them. One example would be the work he titled, "On the Papacy at Rome, Founded by the Devil."

I find it interesting that Luther, much like John Calvin could only rely on his personal pride and emotion rather than sound arguments when it came to refuting Catholic teachings. Luther also made it a practice to attack early Church Fathers personally as well, making accusations that would make it appear as if he had known them personally. For instance he once said in referring to the great Saint Jerome, "I know no doctor whom I hate so much, although I once loved him so ardently. Surely there's more learning in Aesop, than in all of Jerome" (LW 54, 72) Let us assume that humility was not one of Martin Luther's virtues. In fact if we compare Luther's character to that of the Saints like Jerome we find a stark contrast. The Saint's lives were similar to Christ's while Luther's fell in line with rebellion. He also said similar rude things about Saint John Chrysostom and Saint Basil as well, who would have made Luther look like a fool when it comes to Biblical scholarship and holiness of living.

This particular paper that I have linked to however makes reference to Luther's last days and some of his writings just before he died. There are some who have said that Luther toned down his anti-papal rhetoric before his demise. According to this particular professor however this does not appear to be the case. It appears that Luther went to his grave a raving, mad, anti-Catholic heretic. Here are some of Luther's last words according to this professor who is from Queensland Presbyterian Theological College in Brisbane, Queensland, Commonwealth of Australia.

"Luther died in 1546. Just before he did, he wrote in his Preface to the Reader in his Complete Works:139 "Farewell, dear reader in the Lord! Pray that the Word may be spread further abroad, and may be strong against the miserable Devil.... The kingdom of his vicar, the Antichrist in Rome, is sore beset.... May the God of all grace and mercy -- strengthen and complete in us the work He has begun!" In his last sermon before his death, Luther refers140 to the words of Christ:‘Come to Me, all who labour and are heavy-laden, and I will give you rest!’ Luther then paraphrases Christ’s words as follows: “I will give you the heart to laugh -- even though Turk, Pope, Emperor, and everybody else be filled with horrible wrath and rage.... If you are facing oppression, death or torture -- because the Pope, the Turk and Emperor are attacking you -- do not be afraid! ... I give you the Spirit!...

“Let misfortune, sin, death and whatever the Devil and the World loads upon you -- assail and assault you!If only you remain confident and undismayed, waiting upon the Lord in faith -- you have won already!”

Dear reader, do you believe as Luther believed? In our dark days, yet at the dawn of Christianity’s third millennium -- are you really a Protestant Christian? Do you believe, with the great German Church Reformer, that the powerful Protestant preaching of the Word of God will yet destroy the Papacy--and also Islam? May the faith of Martin Luther yet become yours too!

Luther's last words give an example of a demise to those who live according to their own gospel and not the one Christ gave us through His only Church. Most people die as they live, and it appears that Luther's life ended with one foot in hell and the other on a banana peel of pride, conveniently left by the devil next to Luther's dying bedside. It is sad to say that although many Protestants have distanced themselves from this type of anti-Catholic bigotry, they are still in the same position that Luther was in. How many Lutheran's do you find like this professor who will own up to his Lutheran heritage openly? Not many that is for certain. But it remains a fact that every professing Lutheran has their foundation of faith built on this madman's phony "gospel". In fact the proof is in the pudding. Look at the professors closing words of his paper. He says, "May the faith of Martin Luther yet become yours too!" I pray that those who follow Martin Luther will have a change of heart and come home to the Catholic Church. Luther's end is not one I would wish on anyone.
Posted by James Bellisario at 7:37 PM

Email ThisBlogThis!Share to TwitterShare to FacebookShare to Pinterest
Labels: Luther

"There are some who have said that Luther toned down his anti-papal rhetoric before his demise."

These are the actual last words of Luther:

2. No one can understand Cicero's Letters (or so I teach), unless
he has busied himself in the affairs of some prominent state for
twenty years.

3. Know that no one can have indulged in the Holy Writers
sufficiently, unless he has governed churches for a hundred years
with the prophets, such as Elijah and Elisha, John the Baptist,
Christ and the apostles.

Do not assail this divine Aeneid; nay, rather prostrate revere the
ground that it treads.

We are beggars: this is true.

God used Martin Luther to lead His people out of increasing aposate religious organization. Peter was instructed to stand upon this rock “You are the Christ, the Son of the living God.” and to feed His sheep. The post-reformation Roman Catholic Church has departed from this rock and feed wolves. I thank The Lord for Martin Luther.

Martin Luther's last words were:
On 17 February 1546. After 8:00 pm, he experienced chest pains. When he went to his bed, he prayed, "Into your hand I commit my spirit; you have redeemed me, O Lord, faithful God" (Ps. 31:5), the common prayer of the dying. At 1:00 am he awoke with more chest pain and was warmed with hot towels. He thanked God for revealing his Son to him in whom he had believed. His companions, Justus Jonas and Michael Coelius, shouted loudly, "Reverend father, are you ready to die trusting in your Lord Jesus Christ and to confess the doctrine which you have taught in his name?" A distinct "Yes" was Luther's reply.

An apoplectic stroke deprived him of his speech, and he died shortly afterwards at 2:45 a.m. on 18 February 1546, aged 62, in Eisleben, the city of his birth. He was buried in the Castle Church in Wittenberg, beneath the pulpit.[238] The funeral was held by his friends Johannes Bugenhagen and Philipp Melanchthon.[239] A year later, troops of Luther's adversary Charles V, Holy Roman Emperor entered the town, but were ordered by Charles not to disturb the grave.[239]

A piece of paper was later found on which Luther had written his last statement. The statement was in Latin, apart from "We are beggars," which was in German.

Martin Luther was a man, following his conscience, which the Roman church wants to control of every man. The Pope is a man, fallible, teaching that the church is above God's holy word and priests can forgive sins. This usurps the power of Christ's priesthood in the sanctuary in heaven. Only God can forgive sins. There is no purgatory mentioned in the bible- this makes God a liar and His word false.

"There is no purgatory mentioned in the bible- this makes God a liar and His word false."

Purgatory is mentioned in the Scriptures, which makes you a liar, not God.

But of course by your own authority you have thrown many books of the Old Testament, which also makes you contending against God and his Word.

Christ Jesus, in John chapter 3, states that a man must be "born again", and that this new birth is by the Holy Spirit and not of a man's own flesh. Sadly, most professing Christians have only a faith born of their own flesh, making them only false Christians. This is the plight of the Roman Catholic. Luther was right about the apostate Roman Catholic "church": it IS of the devil, and has led countless men and women to hell.
Study God's Word, and NOT RC "tradition".
monergism.com
9marks.org

Brian, the problem is you like your buddy Luther do not understand what "being born again" is. You just make up what you want, and then find a passage of Scripture you can take out of context to fit your man made understanding.

To all Christians both Catholics and Protestants you can not deny that Martin Luther's heart was full of hate and not of love.
By which he himself went against the scriptures and did not teach love. His hate for the papacy essp that of Pope Leo X was very evident and to fuel his excommunication thus started his rampage against the church instead of his priestly act to draw followers to Christ.

"Always be ready to give an explanation to anyone who asks you for a reason for your hope, but do it with gentleness and reverence, keeping your conscience clear, so that, when you are maligned, those who defame your good conduct in Christ may themselves be put to shame."

I just don't understand how people can believe that the Catholic Church, started with Jesus Christ himself, and to which he gave to Peter and his successors, went so horribly wrong that only Martin Luther could see this and start another church that is better. The Catholic Church is the first and only true church of Jesus and he stated in the bible that it will prevail. And since this Luther split, there are over 20,000 different christian denominations. Some doing things that are clearly stated in the bible as wrong. All with their own view of the bible. There is only one truth. Be humble and ask the Holy Spirit to show you the way. Luther's church is not the church of Jesus.