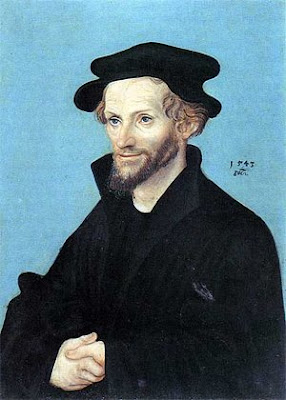 The evil and blasphemous Philip Melanchthon above and a demonic cartoon below mocking the Papacy that he published in 1523. 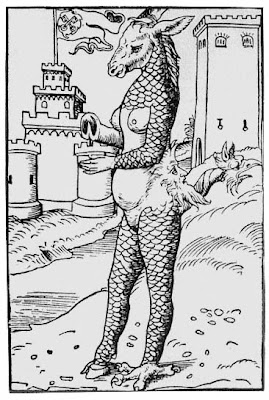 We of course know that all Protestants reject the Papacy and the Catholic Church. Although there are many Protestants today who are not as rabidly anti-Catholic as their forefathers were, we must remember that their creeds and the foundation that their heretical faith is based upon is rabidly Anti-Catholic. I wanted to post a few excerpts below from some of their "confessions" which deal with the Papacy. After you read below you will find that these confessions radically attack the Pope and every one of them refer to him as the anti-Christ. This is a friendly reminder to all Catholics that we must not let false ecumenism get in the way of denouncing these heresies. While many Protestants are ignorant of their heritage, they are still following in the footsteps of some of these "confessions." The only real ecumenism that is worth anything is one that brings their conversion, not complacency with their evil heresies.

25.6. There is no other head of the Church but the Lord Jesus Christ: nor can the Pope of Rome in any sense be head thereof; but is that Antichrist, that man of sin and son of perdition, that exalts himself in the Church against Christ, and all that is called God.

26.4. The Lord Jesus Christ is the Head of the church, in whom, by the appointment of the Father, all power for the calling, institution, order or government of the church, is invested in a supreme and sovereign manner; neither can the Pope of Rome in any sense be head thereof, but is that antichrist, that man of sin, and son of perdition, that exalteth himself in the church against Christ.

Article IV: Of the Papacy.

10] This teaching shows forcefully that the Pope is the very Antichrist, who has exalted himself above, and opposed himself against Christ because he will not permit Christians to be saved without his power, which, nevertheless, is nothing, and is neither ordained nor commanded by God. 11] This is, properly speaking to exalt himself above all that is called God as Paul says, 2 Thess. 2:4. Even the Turks or the Tartars, great enemies of Christians as they are, do not do this, but they allow whoever wishes to believe in Christ, and take bodily tribute and obedience from Christians.

12] The Pope, however, prohibits this faith, saying that to be saved a person must obey him. This we are unwilling to do, even though on this account we must die in God s name. 13] This all proceeds from the fact that the Pope has wished to be called the supreme head of the Christian Church by divine right. Accordingly he had to make himself equal and superior to Christ, and had to cause himself to be proclaimed the head and then the lord of the Church, and finally of the whole world, and simply God on earth, until he has dared to issue commands even to the angels in heaven. 14] And when we distinguish the Pope's teaching from, or measure and hold it against, Holy Scripture, it is found [it appears plainly] that the Pope's teaching, where it is best, has been taken from the imperial and heathen law and treats of political matters and decisions or rights, as the Decretals show; furthermore, it teaches of ceremonies concerning churches, garments, food, persons and [similar] puerile, theatrical and comical things without measure, but in all these things nothing at all of Christ, faith, and the commandments of God. Lastly, it is nothing else than the devil himself, because above and against God he urges [and disseminates] his [papal] falsehoods concerning masses, purgatory, the monastic life, one's own works and [fictitious] divine worship (for this is the very Papacy [upon each of which the Papacy is altogether founded and is standing]), and condemns, murders and tortures all Christians who do not exalt and honor these abominations [of the Pope] above all things. Therefore, just as little as we can worship the devil himself as Lord and God, we can endure his apostle, the Pope, or Antichrist, in his rule as head or lord. For to lie and to kill, and to destroy body and soul eternally, that is wherein his papal government really consists, as I have very clearly shown in many books.

"The whole succession of Popes from Gregory VII. are undoubtedly antichrist. Yet this hinders not, but that the last Pope in this succession will be more eminently the antichrist, the man of sin, adding to that of his predecessors a peculiar degree of wickedness from the bottomless pit. This individual person, as Pope, is the seventh head of the beast; as the man of sin, he is the eighth, or the beast himself."
Posted by James Bellisario at 5:02 PM

Email ThisBlogThis!Share to TwitterShare to FacebookShare to Pinterest
Labels: Protestantism

Wouldn't you think that some modern day Protestant apologists would recognize their inconsistency of distancing themselves from the Jack Chick types we see today, yet simultaneously embracing their forefathers of regretful memory which you have drawn light to here?